This new low energy dwelling has been conceived in the style of traditional Suffolk long houses and barns. The building is highly insulated and clad in Suffolk red bricks laid in lime mortar, the building borrows from the past but projects a very modern exterior and interior.

We were commissioned to undertake the design of the foundations and superstructure.

The project team were keen for an all timber build. This lead to the adoption of traditional braced timber walls, harking back to medieval techniques. The timber braces were built into the walls and designed to withstand the applied wind force in compression. Ply sheathing was also applied to fully unite the assembly such that it acted as a whole. Anchoring the sole plate to the sub-structures was required at frequent centres. We designed the eaves level wall plate as a horizontal flitch beam to provide a stiff ring structure, spanning horizontally between trusses.

The relatively small amount of isolated secondary steelwork was generally used at the open plan kitchen and dining end of the building, to support the external walls over large openings

The design incorporated a corner fireplace with cantilevered brick chimney breast over. This challenge was met by designing a reinforced concrete ‘register plate’ above the hearth opening level. This was supported on two sides, meeting at a right angle.

This project went on to win Grand Designs Home of the year. Suffolk Property Awards - Residential Property Development of the Year Award, and Winner of Winners Award. 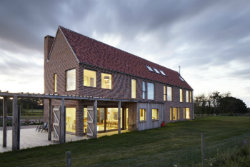 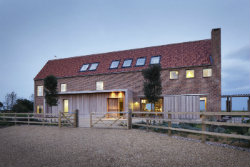 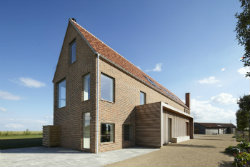